Already in 1952, Tolsma had begun developing devices for the storage of potatoes. 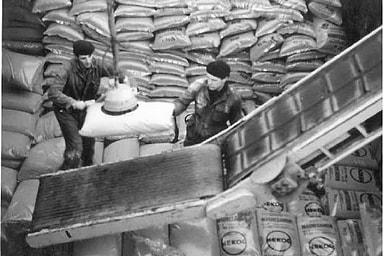 Before that, the family had been active as wristwatch manufacturers and trading in household devices, televisions and radios in the north of Holland. Also they installed electrical installations. The basis of the current company was laid in 1966, when Tolsma put a new manufacturing building in use, where they started fabricated the fans and triangular air ducts. Because of the presence of Tolsma in the centre of potato growth in the Netherlands the development of new storage technology went very fast in the sixties and seventies. Removable partitions, temperature measurement units, the introduction of the climate control computer and the in-house production of fans are only a few examples.

When a solid foundation was laid on the Dutch market, it was time to expand abroad. In the eighties, sales in Germany and France started. At the end of the eighties, the first order came from Russia. In 1986 HGV was founded, the Tolsma sales office in Bad Fallingbostel, Germany. Starting from 1990, Tolsma was already active on the global market, with major ventilation projects, but also for refrigeration of potatoes, onions and carrots. In this decade, the first mixed air units and compact coolers were developed as well.

The company’s expansion continued through the acquisition of several companies. The market for mechanical refrigeration was expanded through the acquisition of a company in the early ’90s. Furthermore, Tolsma took over Becom (ventilation and control technology) in 2005 and Grisnich (specialist in the area of internal logistics and grading of potatoes) in 2007. Under the new name Tolsma-Grisnich, the company was now able to provide the best solution for the customer, all under one roof.

Further expansion of the market took place in the new millennium, trough the opening of several representative offices abroad:

During this period, the development of new products and techniques continued. In 2012, Tolsma-Grisnich introduced Track & Trace (box registration system) and the company took over the right of the Swiss company Samro, manufacturer of the stone- and clod separator. The acquired knowledge over the years, company take-overs and international expansion has enabled Tolsma-Grisnich to be a reliable and innovative partner for growers and processors, now and in the future.

Configure your own storage